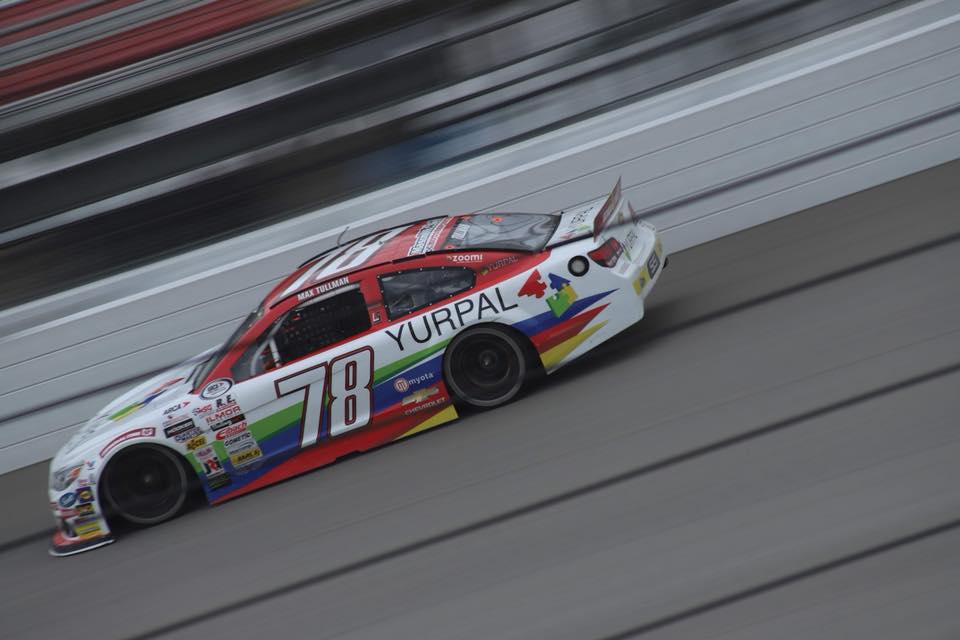 Last weekend saw a prime opportunity for the veteran Sports Car racer to add Gateway (Ill.) Motorsports Park to his already increasing stock car schedule. Unfortunately, the weekend was full of obstacles. From a setback in testing due to contact with the wall – to a tire failure during the race, Tullman sees his debut at Chicagoland as the perfect opportunity to recover and net his fourth top-10 of the season.

“I hate that things didn’t work out at Gateway like we hoped, but Chicagoland is a new opportunity and I’m ready to embrace it,” said Tullman. “Even though Chicagoland is a new track to me, my team has enjoyed great success there and I’m looking forward to adding to those memories on Thursday night.”

For the third time this season, Yurpal.com will support Tullman in ARCA competition.

Yurpal.com is the first and only e-commerce platform designed and dedicated to the construction and building materials industry.

“It’s a big deal to have Yurpal.com back on board with us this weekend at Chicagoland,” Tullman explained. “We’ve been able to bring a new partner to ARCA and expand their relationship from one race to three races so far and I’m looking forward to having them a part of many more races in the future.”

Yurpal.com CEO Jon De Langis is again thrilled about his company’s return with Tullman and MMM.

“All of us at Yurpal.com are very excited to have this third opportunity to support Max Tullman and Mason Mitchell Motorsports this weekend at Chicagoland Speedway,” offered De Langis.

“As we’ve mentioned, we consider a relationship in Motorsports as a very high priority to promote our brand as we continue to grow our eCommerce platform for building materials and products. Our exposure and recognition these first two races was tremendous and we’re looking forward to this next ARCA experience with Max and the team.”

“I’m really going to be leaning on Mason (Mitchell) this weekend at Chicago,” added Tullman. “He is so smart and knowledgeable when it comes to intermediate track racing. I’m still learning. This year has been all about learning. With his support and if we can have a few things fall our way, we have a shot at Victory Lane.”

It will be a busy weekend for Tullman, the Chester Springs, Pa. native. In addition to the ARCA race, he’ll also compete in Friday night’s Overton’s 225 NASCAR Camping World Truck Series race for Young’s Motorsports.

The 150-lap race, his series debut will be the first of a minimum three-race deal with the Mooresville, N.C.-based team this season.

Yurpal.com will also serve as the primary marketing partner on the team’s No. 20 Chevrolet Silverado.

“I’m really grateful for this opportunity with Young’s Motorsports,” added Tullman. “We weren’t expecting to race trucks until Canadian Tire Motorsport Park in September, but the opportunity came to life and we jumped on it.

“The goal on Friday night is strictly just to see the checkered flag.”

“Doug and I continue to get closer and closer – both on and off the track,” sounded Tullman. “He’s super patient with me and is really determined to make me a better race car driver inside and out.

“He isn’t afraid to critique me and get tough with me when I need it. At the same time, he’s equally quick to praise me when I’ve done something right or make major improvements. That’s a leader.

“His loyalty is important to me and my family. While my learning curve continues, at the end of the day, I’m confident Doug’s approach is eventually going to take us from contenders to winners.”

Following Chicagoland, the 20-year-old Tullman will return to Mason Mitchell Motorsports for at least one more ARCA race at Iowa Speedway next month.

“We’re working around the clock to keep me racing more in ARCA with Mason and Doug,” explained Tullman. “We’ve got a lot of good things happening, but everyone knows the more I’m in a race car – the better I’m going to be in a long run. I wouldn’t be surprised to see us in a couple more races following Iowa.”

Additional stock car races are set to be added to Tullman’s schedule and will be announced in the immediate future.

Tullman will be a teammate to Blaine Perkins (No. 98 Chevrolet) for the third time in 2018.

The Scott 150 (100 laps |150 miles) is the 11th of 20 races on the 2018 ARCA Racing Series presented by Menards schedule. Practice begins Thur., June 28 with a two and half hour session planned from 2:00 p.m. – 3:30 p.m. General Tire pole qualifying is set for later in the day at 5:35 p.m. The race is set to take the green flag later in the day shortly after 8:00 p.m. The event will be broadcasted live on FOX Sports 1, while ARCARacing.com will stream live timing and scoring throughout the week’s activities. All times are local (CT).

Yurpal.com is the first and only e-commerce platform designed and dedicated to the construction and building materials industry.

Through the convenience of our online platform, buyers can create or upload their entire bill-of-materials for projects large and small and receive competitive price results from every vendor in the country with a single click.  With the use of our bundled SaaS, our users can manage multiple clients and projects, schedule phased deliveries of their products, and much more.

This can be done simultaneously which significantly reduces the repetitive and time-consuming process of sourcing products, from multiple vendors, to get the products when and where they are needed, at the best price available.  Essentially, we bring the vendors to the buyers.  Best of all, this platform is free for buyers to use.